If the robot has three degrees of freedom, it can move freely along the X, Y and Z axes, but it can't tilt. As the number of axes of the robot increases, it has higher flexibility. At present, the 6 axis robot is the most used in the market.

In production, industrial robots generally need to be equipped with peripherals in addition to their own performance characteristics. For example, the rotary table that rotates the workpiece, the mobile table that moves the workpiece, etc. The motion and position control of these peripheral devices need to match with industrial robots and require corresponding accuracy.

Now, what are the six axes of a 6-axis robot and what are their functions? And how to move?

1. What are the 6 axes of a robotic manipulator? 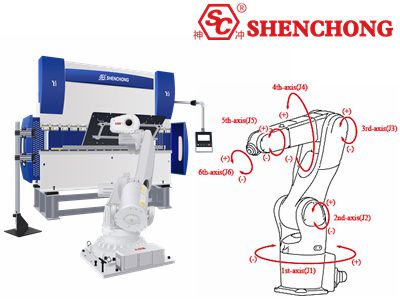 The axis of industrial robot can be explained by the professional term "degree of freedom". It is reasonable to speculate that when the number of axes of the robot increases, the robot will have higher flexibility.

It is a part connecting the base and a large bearing shaft of industrial robot.

It can rotate left and right, similar to the action mode of grinding plate.

It carries the weight of the whole robot and the large horizontal swing of the robot.

- The Second Axis: front and rear swing axis of the main arm

This is the core connection position of robot components.

It plays a connecting role. An important axis that controls the robot's forward and backward swing and telescoping.

The third axis is the axis that controls the robot to swing back and forth. The action function of the three-axis and the two-axis is similar, and it is also the function of controlling the robot's unloading and swinging.

The motion in the three-axis position is relatively small. This is also the basis for the six-axis robot arm span.

It is the part of the position of the circular tube axis on the industrial robot, which can rotate freely, that is, the rotation of a cylinder is limited by more cables inside.

The four axes are an axis that controls the 180 ° free rotation of the upper arm, which is equivalent to the human forearm.

The fifth axis is very important. When you almost adjust the position, you have to accurately locate the work pieces, and you need to use the fifth axis.

This part is equivalent to the wrist joint in the human arm, which can move up and down in a small range. It is used to turn over the product or fixed tool after the work piece grasped.

It is a joint that is fine tuned at the back. When you position the fifth axis on the product, you need to make some minor changes. At this time, you need to use the sixth axis.

The sixth axis is equivalent to a rotary table that can rotate 360° horizontally. The product can be positioned more accurately.

2. What are the components of a six-axis joint robot? 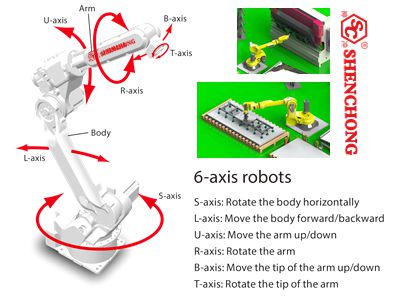 The common 6-axis robot has six servo motors built in and drives the rotation of six joint axes directly through reducer and synchronous pulley.

6 joints are synthesized to achieve 6 degrees of freedom at the end.

It has six degrees of freedom and can execute operator commands. Most operations, from workpiece rotation to complex workpiece placement and assembly can be performed.

The benefit of rail mounting is that it simplifies tool configuration at the end of the arm. In some cases, these tools can be shared between component runs. These six-axis robotic arms are quite flexible and can remove workpieces from the top or side of the machine.

The biggest feature of 6 axis industrial robot is flexible automation. It is an important part of flexible manufacturing system.

Industrial robots can be reprogrammed with the changes of their working environment and machined parts. It is suitable for the application of small batch and multi variety flexible manufacturing production line with balanced and high efficiency.

The 6-axis robot has good versatility when performing different tasks. Of course, there are also special industrial robots.

Six-axis robots can be used for automatic assembly, painting, handling, welding and post-processing. It uses a linear axis for repositioning, which allows for flexible human-like movements and can carry out operator commands. It has many advantages, such as high flexibility, large load, high positioning accuracy and so on.

- The six axis has a high degree of freedom.

- It is suitable for almost any track or angle.

- You can program freely.

- The operation is very simple, which can realize the flexible and fast replacement between different work pieces.

- It has high accessibility and can make its hand work in a closed space, while the rectangular coordinate robot can not do this kind of work.

- Replace many complex jobs that are not suitable for human completion and harmful to health.

- The high price leads to the high cost of initial investment.

- A lot of preparation before production, such as programming and computer simulation, takes a long time.

- The axes of elbow and shoulder are parallel. When the big and small arms are stretched in a straight line, although they can reach a far working point, the structural stiffness of the robot is relatively low.

5.What are the differences between a four axis robot and a six axis robot? 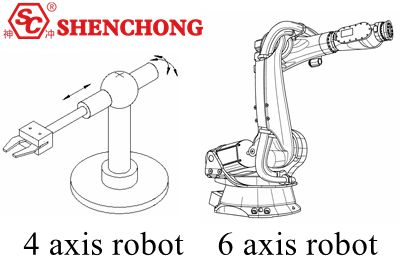 The four axis robot is designed for high-speed pick-up and release operation. The six axis robot with two more axes is for higher flexibility.

In small assembly robots: "four-axis manipulator" refers to "selective assembly joint robotic arm", that is, the arm part of the 4 axis manipulator can move freely in a geometric plane.

The first two joints of the 4-axis manipulator can rotate freely left and right on the horizontal plane. The third joint consists of a metal rod called a quill and a gripper. The metal rod can move up and down in the vertical plane or rotate around its vertical axis, but cannot be tilted.

This unique design makes the four-axis manipulator have strong rigidity. So that they can be competent for high-speed and highly repetitive work. In packaging applications, four axis manipulator is good at high-speed picking and placing and other material processing tasks.

The six axis robot has two more joints than the four axis robot, so it has more "freedom of action".

The first joint of the 6 axis robot can rotate freely in the horizontal plane like the four axis robot. The latter two joints can move in a vertical plane.

In addition, the six axis robot has one "arm" and two "wrist" joints, which makes it have the ability of human arm and wrist.

Wuxi Shenchong robotic press brake unit is always use 6-axis robot manipulator. The six axis robot has more joints, which means that they can pick up the parts facing arbitrarily on the horizontal plane and put them into the packaged products at a special angle.

It can perform many operations that can only be performed by skilled workers. Moreover, it saves manpower and expenses, which is a good choice for companies that have just been established. 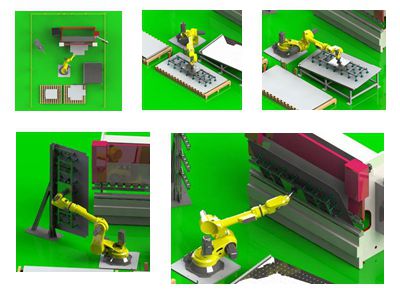 3-axis, 4-axis, and 6-axis robots are collectively referred to as "automation". Automation technology can not only liberate people from heavy manual labor, part of mental labor, and harsh and dangerous working environments. Moreover, it can expand the functions of human organs, greatly improve labor productivity, and enhance human ability to understand and transform the world.

Robotic automation and flexible line technology are not as complicated, dangerous and costly as some people think, but are very simple and safe, and may also gain economic advantages.